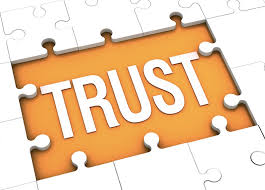 I know someone
who’s renowned for his scepticism. The only problem is, he’s now so sceptical that he doesn’t feel able to trust anything. People who post videos on YouTube seem to have as much, or little, credibility as professional journalists. After all, journalists can succumb to group think. And who’s paying them, anyway?

I work with people who are temperamentally inclined to trust other people. They open up their own homes and lives to people who they have not known for very long. And sometimes it doesn’t work and they cope with this, but I hear constantly that living this way makes them happy. They are realistic about the people they live with, but often able to see and value them in ways that others cannot. Those who are considered vulnerable – the very young and the old – could be most at risk from this openness, but they are also those who appear to benefit most.

For instance, Homeshare organisations help older people to take what many people unfamiliar with the Homeshare model would consider an unusual risk: to let someone they have only fairly recently met into their homes. Of course, the most serious risks are mitigated against – There are police checks, references, monitoring, and interviews, but the core of the model is about helping two people establish trust. Recently I was also talking to two young women whose parents were Shared Lives carers. They had valued the experience so much that both were now involved in Shared Lives as adults, contributing untold amounts to those around them and their communities. If Shared Lives or Homeshare arrangements don’t work out, the local organisation steps in to help, but there is always an element of risk.

The risks of trusting no one, however, are stark. When we start to avoid the risk of trusting others, it can give us a short term sense of safety, but everything we value is corroded. Loneliness not only crushes happiness; it is in the same bracket of health risk as smoking. It is now endemic amongst older people, and even the best health or care service can’t fix it.

I also spend quite a bit of my time with a group of people who generally come quite low down on people’s trust list: politicians. My experience of them is that, whilst I often disagree with them on lots of things and sometimes feel we have very different life experiences and world views, they are generally people who believe they are helping other people. They work ridiculous hours and a lot of what they do is not at all glamourous, but is absolutely necessary in a democracy. They are as flawed as the rest of us, but based on having met quite a few, I am inclined to approach them with an attitude of sceptical trust, because without it we have no democracy worth the name. And of course, because I hope they will approach me and others who work for charities with something like the same attitude.

This seems a strange time to be suggesting that we all trust each other – whether we are Shared Lives carers or politicians – more. As 2017 picks up where 2016 left off, I am not completely confident that I will be able to practice what I preach on this, all of the time. But if you’re willing to try to approach me with something like sceptical trust, most of the time, I will do the same for you.

It is, I think, from small acts of trust that functioning communities, organisations and even nations are built.