As Homeshare was discussed on radio 4 on 1st January along with other intergenerational housing models and how we can scale these up and make them available to more people we look at some of the key issues our society faces and how Homeshare can be a part of the solution.

Loneliness and social isolation are Public Health issues and well as social and wellbeing ones. They affect all population groups impacting on their quality of life, resulting in serious physical health conditions and driving down people’s mental health and wellbeing (The Zubairi Report)  The Campaign to End Loneliness states that the number of over-50s experiencing loneliness is set to reach two million by 2025/6. Over half (51%) of all people aged 75 and over live alone (Office for National Statistics) and lonely people are more likely to suffer from dementia, heart disease and depression. (Valtorta et al, 2016) (James et al, 2011) (Cacioppo et al, 2006). It’s not just an older age problem, a study by The Co-op and the British Red Cross reveals over 9 million people in the UK across all adult ages are either always or often lonely.

Over recent decades, links between the generations have progressively weakened, as extended families have continued to live more distantly, and people of different ages spend less time in shared spaces or involved in shared activities. Well-publicised initiatives, such as the co-located nursery and care home model from the Netherlands have shown the value of intergenerational contact but remain the exception. That housing is not built with later life in general, let alone intergenerational living, in mind, suggests that it will take decades more to knit the generations back together again.

Homeshare is an approach we can expand now, using existing houses, and at little cost to the state. Homeshare works. It has a decades-long track record in the UK and around the world. There has been a 22% growth in the number of Homeshare matches in the UK over the past 12 months with more than a 1000 people having participated in a Homeshare match in 2019 and this is the direct beneficiaries. Beyond the Homeshare match there is peace of mind for families, reduced visits to GPs and A&E and faster discharge from hospital.

It works because it sees that two groups of people often thought of in terms of their problems, also have much to offer: not just a spare room and the ability to help out, but, crucially, companionship, which young people can lack just as much as older people.

My aunt feels so much happier in herself since you have helped her find a homesharer. She used to take herself off the hospital in the evenings because she was so lonely. Homesharing is amazing, so many lonely poepel would benefit, you have to spread the word! Family of Householder, London

Our aim is for Homeshare to become a mainstream housing and social care option,delivered by people and organisations in which participants can have confidence.

To make this happen we need: 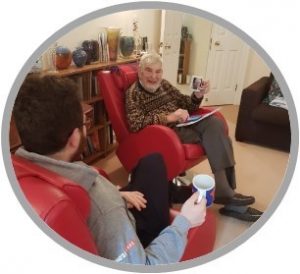 Norman, a 91-year-old gentleman living on his own wanted some company and someone to help with the cooking. He was particularly interested in politics, and the possibility of homesharing with a refugee.

Two Generations worked with both Norman and his son and after a process of careful vetting and matching, Norman was introduced to Jorge from Syria.

Jorge has a background in pharmacy and a natural interest in politics, having worked

in peacekeeping for a number of non-government organisations, and his work had been recognised internationally. Jorge is a great cook and was seeking a family environment which he missed from his home country.

When the two met, they immediately took to each other and are both benefiting from their Homeshare.