The real ‘Lodgers for Codgers’. Why Homeshare is more than just a TV experiment.

The Channel 4 TV show ‘Lodgers for Codgers’ was launched recently and, as an experiment based loosely on our own Homeshare model, gives us the chance to see how it compares to the real thing.

The show uses a speed dating café to match older and younger people who, following their short introduction, agree to move in together for five days in exchange for some rent and help around the house. The cameras follow them throughout the week to see how they get on.

‘Real’ Homeshare in the UK is a bit different. It is not a commercial arrangement with a ‘landlord’ and ‘tenant’ relationship. The Householder is usually an older person that has a comfortable spare room and is looking to offer it to a younger person (a Homesharer) in exchange for some company and practical help around the house. No rent is exchanged and it’s a reciprocal arrangement whereby both have something to give and something they need.

A crucial difference here is the match itself. Homeshare matches are based on mutual respect, shared interests and last as long as people want. We would not put people with conflicting views or lifestyles in the same house, although I guess this would make for slightly less exciting TV!

In addition, all Homeshare matches are arranged and facilitated by a third party Homeshare organisation, which carefully vets and matches each party for safety and compatibility. They are given time to get to know each other before moving in and the match is monitored and supported on an ongoing basis, to ensure continued safety and security. Both parties pay a monthly fee to the organisation for their service. 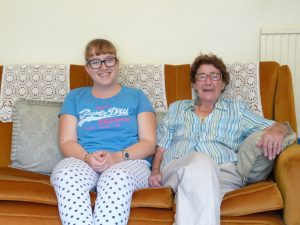 But while the real Homeshare is clearly different, the overall concept of Lodgers for Codgers is the same. We have two groups of people that are facing challenges but have plenty to offer each other. For Householders, they have spare rooms in nice, comfortable, safe houses, but maybe they are living alone and need companionship, a friendly face or an extra pair of hands. Or perhaps they simply want to give back and support a younger generation that is experiencing very different prospects and opportunities.

There is also a housing crisis in the UK. Rents are high and often out of reach for young people, not to mention saving for a deposit. Work can be temporary so maintaining the income to pay rent isn’t always feasible. Buying your own home, finding a deposit and being approved for a mortgage seems a lifetime away for many. Loneliness can be an issue for people of all ages, and the current pandemic and social restrictions have only exacerbated this. So, all things considered, using the existing housing assets we have and creating real solutions seems like a no brainer!

‘Lodgers for Codgers’ is a fairly safe TV experiment and is not unpleasant viewing. It has raised awareness – generating discussion among TV critics and the Twitterati – and provides the occasional heart-warming moment, if few genuine controversies. But as a way of trying to promote a new way of living, by pushing virtual strangers together for just five days, it misses the point somewhat. ‘Real’ Homeshare delivers so much more than this.

Also there’s the title. It’s attention-grabbing, as it undoubtedly needs to be, but is also ageist and seemingly underlines the language that has permeated the media and public life, that seeks to disrespect both millennials and older people. In ‘Lodgers for Codgers’, however, it seems the youngsters get the worst of it. 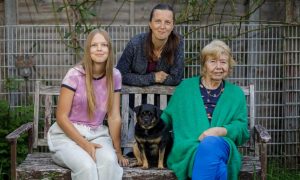 But, like our real Homeshare matches, the people are the heart of the show and their stories, reactions and personalities draw us in. In every match there are highs and lows, tensions and laughs. All said they had learned from the experience, especially spending time with a different generation, although in each case they agreed at the end of the show that it wasn’t for them. In real Homeshare everyone knows what they are signing up for and there is a robust process to ensure people are right for each other. Whether you Homeshare for six months or six years, you will be supported to get the best out of the arrangement, which is why we’re confident each one will last.

We know real Homeshare works, and to prove it we need to turn to a real homesharer:

Living with someone from an older generation has been an invaluable experience, and one that I would recommend, because older people have a lot of knowledge and expertise to dispense. What’s more, unlike those of my peers, our house is never dark, cold or empty when I return and there is always someone there to ask me about my day. . It improves the quality of life for both of us, because company and conversation are vital for mental health. – Zarah, Homesharer in London. Read Zarah’s full story in the metro here

We’re happy that Lodgers for Codgers has helped to shine a light on this amazing service, that supports more than 1000 people in the UK, and thousands more worldwide. The show isn’t perfect, but it does highlight human kindness, warmth and, with 3.4 million young people unable to move out of their parental home, is subtly addressing one of society’s more pressing issues.

You can read more about real Homeshare matches here